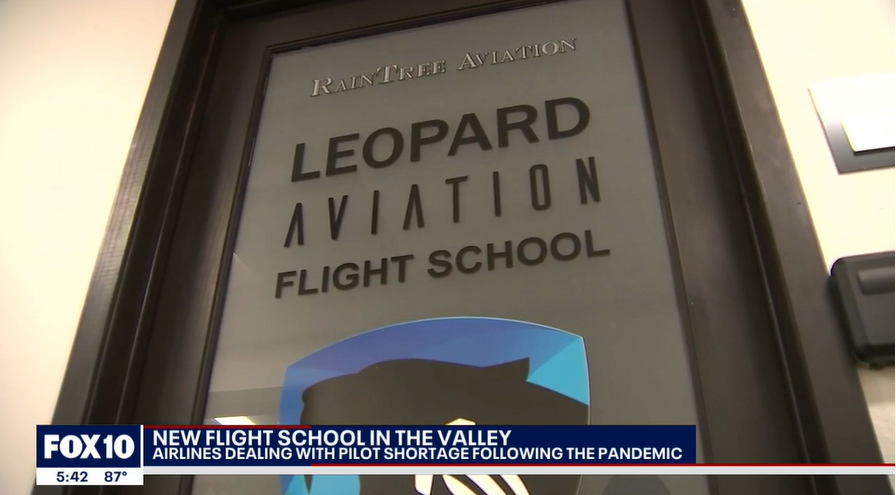 The Fox 10 Morning News Team reported that Leopard Aviation has seen an uptick in the number of students looking to take their careers to the sky. The pilot shortage problem is being addressed by training more students to meet the demand.

Reporter and Pilot Ty Brennan noted that Leopard Aviation, which celebrates its first anniversary in May, opened at a time when many businesses were shutting down, right in the middle of the pandemic. However, CEO Tom Noon immediately saw success.

“The first day, I told my son (Leopard Aviation Instructor Eric Noon), I hope we have 10 students in a month. We had 21,” Noon said. “We did 65 hours of instruction our first full month, and this month, we’ll do 650.”

The Fox 10 news segment helped Noon announce the addition of two new Cessna Skyhawks 172s to the Leopard Aviation fleet, which were added to keep up with demand for pilot training amidst a pilot shortage.

Brennan also pointed out one of the things that sets Leopard Aviation apart in the industry – flexible, custom flight training. “Their flight school is customizable to achieve anyone’s goal – from getting their private pilot’s license all the way up to a commercial license,” Brennan said.

In addition to career training, Brennan noted that Leopard Aviation also offers Discovery Flights for folks looking to try out flight lessons and, “that’s when the aviation bug is likely to bite.”

Noon added, “I’d say 98% of people that come back from their first flight, say ‘When can I do that again? Very exciting!”

Make sure to check out the live Fox 10 Phoenix segment that went live earlier in the day titled “Leopard Aviation expands fleet of pilot-training aircraft” on the Fox 10 Phoenix website here.

Learn More and Book Your Next Flight Lesson
Call us today at (480) 372-9815 or fill out our online form for more information about how you can be among the first students to fly in Leopard Aviation’s new aircraft!

What Is a Discovery Flight at a Flight School?